In Swedish, where you often can compose words by stacking them together – as when building a wall! – there is an expression that fits well with the first impression a stranger can get from the Croatian island of Cres: “bergtagen”.

Bergtagen means generally speaking to be spellbound, but in the Nordic folklore “bergtagen” meant that supernatural beings could entice people to their dwellings in the mountain or under the earth, and then forever change their minds. 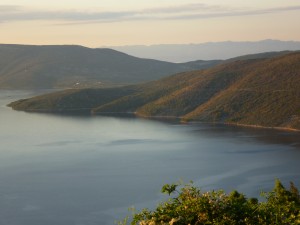 When approaching Cres from the sea – there are not so many other ways , of course! – you are often just “bergtagen”: of the silence that prevails as soon as you have left the mainland, the island’s overwhelming dinosaur dorsal that rises out of the clear water, and by the shifting light whose beauty is … dazzling. The impression is so strong, that even a sharp observer like the Nobel Prize nominee and author Claudio Magris when visiting the island (Microcosmos, 1997), almost missed the interesting and countless gray spots which make the hillsides  look threadbare, or, when flowing down the mountain, resembling dry riverbeds.

Once on land you discover other gray formations along the mountain sides, sometimes regular, as if one sees the remains of an ancient dwelling place exposed by an archaeological dig, or, sometimes, like bleachers in an ancient theater where the vegetation has taken over.

For those who do not linger at the power of the water, the sky and the light, the shock will come immediately.

All this at first invisible, represents the work of human hands. All these gray stones are placed there by human hands! Millions of stones dug up, lifted and moved a few feet or more, away from their original positions to form terraces, fencing surrounding pastures and allotments, land borders, rock piles, storehouses or even living areas.

From the earth rise constructions, made by some hundreds of islanders, stubborn to the extent of infinity, a project of pharaonic dimensions, like the pyramids or the Great Wall of China. 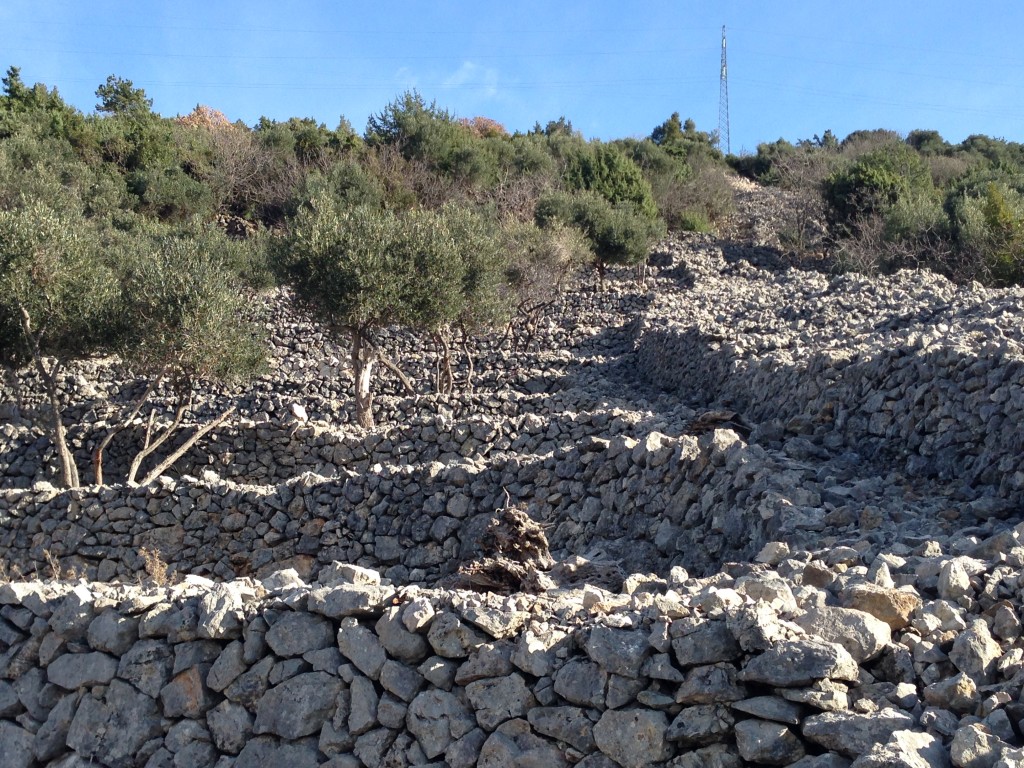 And you will think of Sisyphus.

Sisyphus of course, the ancient treacherous king of Corinth who was punished by the gods to carry a large rock up a mountain only to see it roll down again, and who stubbornly recommenced. Again and again.

But in modern life wish advertisers and other persons gladly rationalize away people’s toil and hardships. In one of the tourist shops in Cres a tourist slogan trumpets out the message: “45th parallel – the best zone for life”. Are they kidding? Are we talking about the same 45th parallel, where the island with the many stones is situated, where Sisyphus children in silence have done great work in order to survive?

Well, it is high time that we see the stones, that we look at our ancestors’ patient work to create meaning, to create life.

The delicate olive trees, the small green oases where the sheep still graze, are small miracles surrounded by generations of quiet, painstaking work. 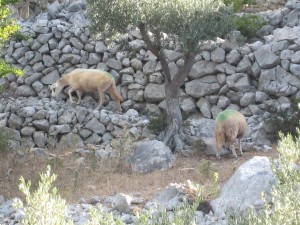 These unmistakably “gray” contructions, which shine so beautifully in the sun, toward the red earth, against the pine green, the blue of the sky and the sea, is a work of monumental humble stubbornness.

“You are Peter, the Rock/the Stone, and on this rock I will build my church,” says the Gospel of Matthew. The inhabitants of Cres may not have built a church, but they have created a sort of shrine, a cathedral in an open country, whose dimensions only a few can realize the extent of, but now it is time to cherish and appreciate it, for generations to come. A request which can also be directed to the strangers who by chance happens to make their way towards Cres and become so “bewitched” by the first impression of the island, that they do not notice this remarkable treasure which the island hides.      Christian Catomeris European Correspondent SVT 2010-2014

A cultural landscape to be preserved

A visitor who goes for a walk in the rural surroundings just outside the town of Cres, cannot but marvel at the huge accumulations of stones spread out, which seem to form ladders between earth and sky. “Fina indove che l’Ocio pol guardar xe masiere … miliardi the piere grige e bianche / su par le gobe, so par le calanche”, as the author Aldo Policek in the island’s dialect describes them in the poem Masiere (“As far as the eye can see there are stone walls … billions of gray and white stones / up over the humpbacks and down to the sea bays “).

The bright geometries in limestone – natural, gray polychrome – which for centuries with great knowledge were developed by the farmer’s hand rest on the hills that surround the town, and gradually flows down the slopes until they merge and mix with the polychrome marine. But it is not only a visual beauty. From the barren karst earth, offered by the nature, the skilled and hard-working farmers by necessity had to transform their habitat. 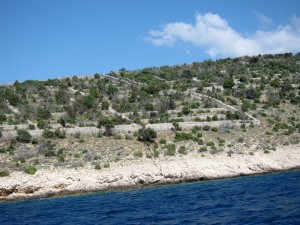 The cultivated area contains social and economic choices which are unique for the island. The work of transformation, in addition to process and improve the soil, has also affected the relationship between individuals and has linked them together with their habitat. The large accumulation of architectural structures, which has promoted the cultivation of various crops and still contributes to the cultivation of olive trees, is “an outstanding example of human interaction with the environment,” which is one of the criteria for UNESCO’s definition of areas of particular cultural and natural importance. The human work carried out in this part of the Kvarner Bay fits well this definition. It must rightly be considered as unique,  in expansion, as well as in quality and quantity of the work made in the Adriatic and the Mediterranean Sea.

The agricultural landscape in different forms and structures dominates the entire island – and particularly the surroundings of the town Cres – is for the present in a state of neglect and decay. The cultural territory – the fruit of a thousand years of experience – is in great need of protection and conservation if we do not want to run the risk of completely losing a unique human heritage. The purpose of our presentation is to make natives and visitors aware of the fact that the original inhabitants of Cres have shaped their territory, and all we can observe is a cultural work, built over centuries, if not millennia. 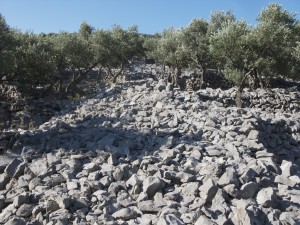 The landscape therefore stretches beyond the aesthetic dimension. It includes historical, ecological environments, structural engineering, and socio-economic aspects related to the past, but valid even  for the present. By valuing the unique environment, the residents in Cres can pursue benefits that go beyond a limited tangible advantage. They can reach greater profits if they consider this cultural treasure as part of the “collective cultural memory”, and the awareness of this fact can be transformed into “a guarantee for the future.”