Some studies of the eastern Mediterranean treat cultural landscape composed of terraces and stone walls. A study on Crete claims that these artefacts “are the most conspicuous sign of a Mediterranean cultural landscape, but among the least understood”. If this observation is applied to the specific case of our island, we must agree that the cultural landscape of Cres is not only misunderstood, but largely unknown. The massive complex of stone structures – not only shows how vital the cultivation of the land was – but also indicates the “relationship between production methods and forms of social and economic organization.” The special intertwining of physical environment, “graje”, “klanez” and “pocivalić” (dialectal names on stone structures), 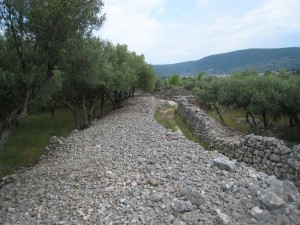 and the social environment, defines the island’s microcosm, where neighbourly relations and kinship ties are typical characteristics of a farming community. It is based on solidarity and mutual exchange of specific knowledge, and applies to both the cultivation of the soil, and the construction of “masiere” (stone walls). The end result of this merger between socio-cultural and physical characteristics constitutes a self-contained economy that has not yet been able to address a wider market.

This culture focuses on change of territory to meet the population’s economic needs, and is also available in other parts of the eastern Mediterranean. On Cres this transformation had to be adapted to the island’s distinctive geological nature. It should be noted that the term “masiere”, commonly used to define the stone walls, is not a term from Cres, but of Venetian origin. On Cres the same word is used for different types of stone walls with different purposes – in Croatian commonly denominated as “gromače”. Although these structures occupy a large part of Cres (and are still clearly visible in the landscape), little or nothing of their origin, age, use, or typology is known. Even less is known of the value they must be ascribed to, if they are regarded as a representation of one of the most striking expressions of human labor in the transformation of the island’s territory and culture. 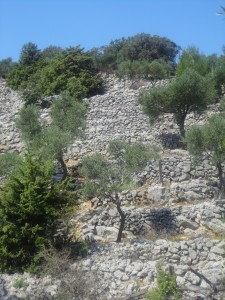 Over the centuries the economic aspects have been consolidated with the transition from grazing culture to agriculture. It has inevitably led to manipulation of the environment to meet the needs for survival by increasing food production, although the climate and geological components caused significant difficulties.  Two main factors have to be taken into account to meet these needs, type of human activity and nature of the territory.

The animal husbandry weakened by drought and disease, and even during prosperous periods, the territory had not the capacity to feed large numbers of grazing animals on the island’s dominions. The “carrying capacity” of the territory (“carrying capacity” is a concept developed 2006 by British biologist M. Begon  et al. ) had reached its limit. Cres was forced to resort to new technologies, new crops and areas to meet the subsistence needs. New land must be extracted with little capital and a lot of work.

The farmers’ willingness to increase the productivity was severely hampered by the lack of vital preconditions for development, such as the availability of energy, water and natural nutrients in the soil. These elements must somehow be added or replaced. The first element (available energy) – such as the use of innovative technologies – was for several reasons difficult to apply. In addition of being difficult of access, they would not have been helpful. The nature of the area requires a fragmented culture, where it is even difficult to use the plow. For this reason, a farmer of Cres always carried, along with the bag, a hoe on his shoulder as he walked to the fields. The water was, with few exceptions, always in short supply, and a systematic irrigation of the soil has never been used on the island. Earth could not be provided with sufficient nutrients, and manure was rarely used. Agriculture on Cres had to rely on the elements that nature itself offered: limestone which had to be crafted in huge quantity. In our opinion, these conditions point out that a grain culture – with certain limited exceptions – were not possible. The peasant, the olive tree, vines and sheep were the only available and appropriate resources for this type of environment.

The topography around the town Cres therefore adopted a structure that reflects the use of the land depending on its location in relation to the center. It corresponds to the model commonly described by geographers for land conquered by mankind since Neolithic times, and is divided into: hortus, ager, saltus and silva. In gardens and intensively cultivated land in the vicinity of the Town natural fertilizers are used, i.e. hortus. In places further away from the center you find areas with partly natural fertilized soil, i.e. ager and even further away areas reserved for sheep grazing, i.e. saltus, and finally forests, i.e. silva.

Near the town of Cres cultivated areas extend over a wide radius up to the top of the hills and down to the shores of the sea to form a sort of natural amphitheater.This amphitheater expresses one of the most unique examples of cultural human labor. The peasants, with stone and great effort, managed to shape their habitat and secure their supply.

There is a remarkable difference between zones in the eastern Mediterranean – as described in various works – and Cres.  In other geographical areas the stones have been removed, and used to level out differences and protect the soil. Our island has however been forced to liberate and move a whole layer of limestone to arrive at the cultivable land. All the extracted stones form the structures that in quantity, ingenuity and variety of work are typical for Cres. From a cursory examination of today’s agricultural landscape, one could easily conclude that the cultivation of olive trees has been dominant in recent centuries, but that is not the case; other crops have, as will be seen under other headings, dominated the agricultural environment and terraces.