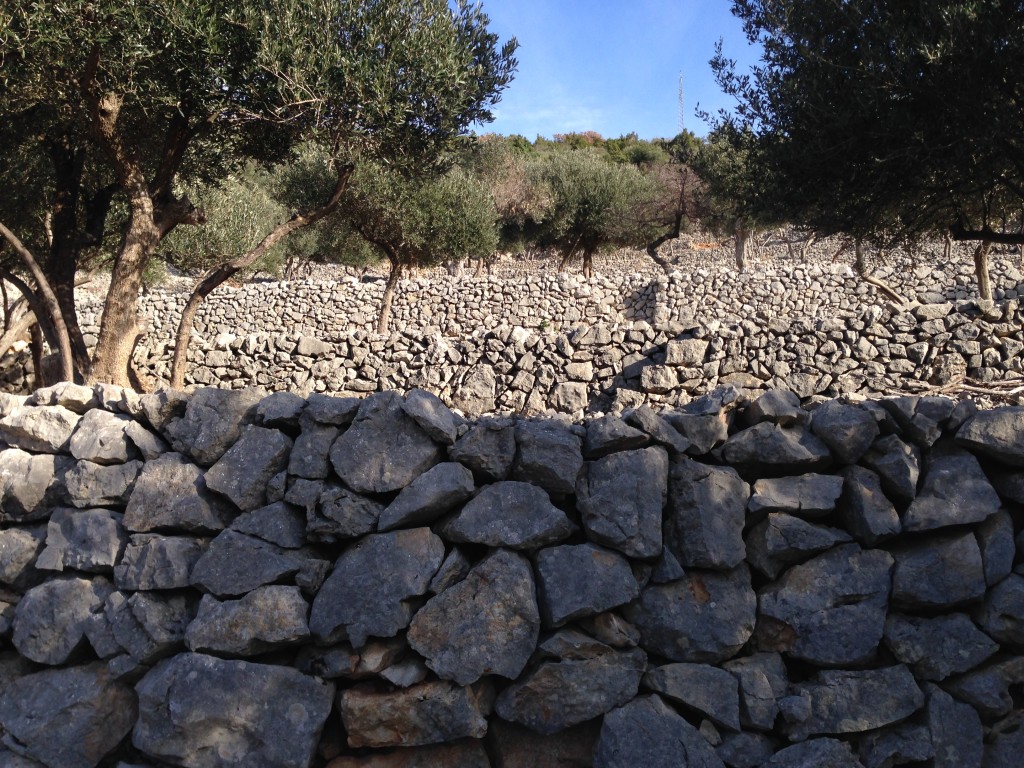 The amount and variety of stone artefacts in the area around the town Cres evokes spontaneous questions: How long have these works existed? How many workers have been required to complete the work? The same questions have been asked in other territorial contexts, but scientific research has not been able to give comprehensive answers. It is estimated that some stone walls in Crete can be dated back to the Bronze Age. The first examples of terraces, found 1987-88 by Julie Ann Clark on the small island Pseina (near Crete), consist of cleck-dams (dams). In Limnos, near Mycenae in the Peloponnese, in an area dominated by dry and hard limestone, small areas of land were found, arranged in terraces built by an accumulation of a large amount of stones in “massive, disproportionate and overlapping” walls that are very similar to so-called menik in Cres.

British and American researchers often express their surprise – and we marvel too – that no document in the archives, no historical or literary report tell of their existence (except for a very short section of the Odyssey). The same uncertainty concerns Cres. There are no data describing the construction of these walls. This is probably due to the fact that the walls were built by humble people who generally never used to document the results of their work. 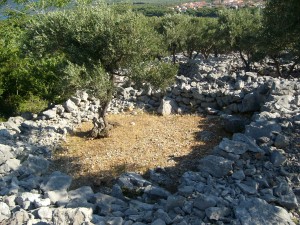 These “masiere” (stone walls) constitute and define “the poor people field” and represent the great work done to compensate for the lack of land – work absolutely necessary in times of need.

Historical sources consulted do not provide any reference to these walls. It is likely that for a long time terraces existed. Fences and walls for purposes not directly related to growing olives , were constructed for other cultures, like vine, vegetables and cereals. An indicator of how old the structures are, can be indirectly provided by the relationship between the size of the work and the “precious arms” which were available. The population of the town Cres amounted during a period of three centuries (1550-1850) to 2500 – 3000 individuals with a working population of 250-300 workers (by the Venetians called “homeni de fatura”), among which, in turn, an even smaller number were engaged in agriculture. It is unlikely that such a small population (which did not include slaves or external labor, something that  historically never existed on Cres) would have the physical ability to perform such a feat in a relatively short time. It is more likely that the transformation of the territory has required a lot of time and lasted for many centuries. Because of the long time it took to build these stone artefacts, one can imagine that there has been an overlay of new structures on the old ones, or a renovation of some parts on a thousands of years old foundation.

Terraces can be of different types: parallel terraces, curved terraces, braided terraces (zigzag), pocket terraces, field terraces, pond-terraces in narrow passes, dam-terraces in hilly terrain, fake terraces, antropogenically inclined and Ligurian terraces. These terrace forms serve to redistribute sediment (soil fertility), to facilitate the penetration of roots (especially of olive trees, using the moisture from limestone), to reduce the slope of the mountain, increase the absorption of rainwater and control the erosion. They are related to soil conditions and morphology of the land and often occur on soils of limestone and marl. The purpose of the terraces is the same in all cultures in the Mediterranean, whether they are Cretan, Greek or Cres, but the amount of labor and energy required to build them differ a lot.

Some of the terraces described above are also present on Cres, where you, however, can observe a special method to develop the land, known as graja. In the case of Cres the technology to build terraces has been adapted to the specific nature and shape of the land, and to the accessibility of the material. 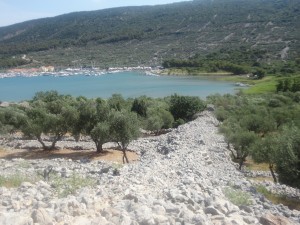 The large amount of stones were removed and accumulated at the edge of the area, which should be cultivated, and are known as menik. In the eyes of the observer, they seem to be part of the landscape’s natural appearance. The liberated surface probably at first served as pasture and were, after a second cleaning, used for the cultivation of cereals, interspersed with cultivation of olive trees and vines.

Terraces and the architectural forms of the olive groves on Cres 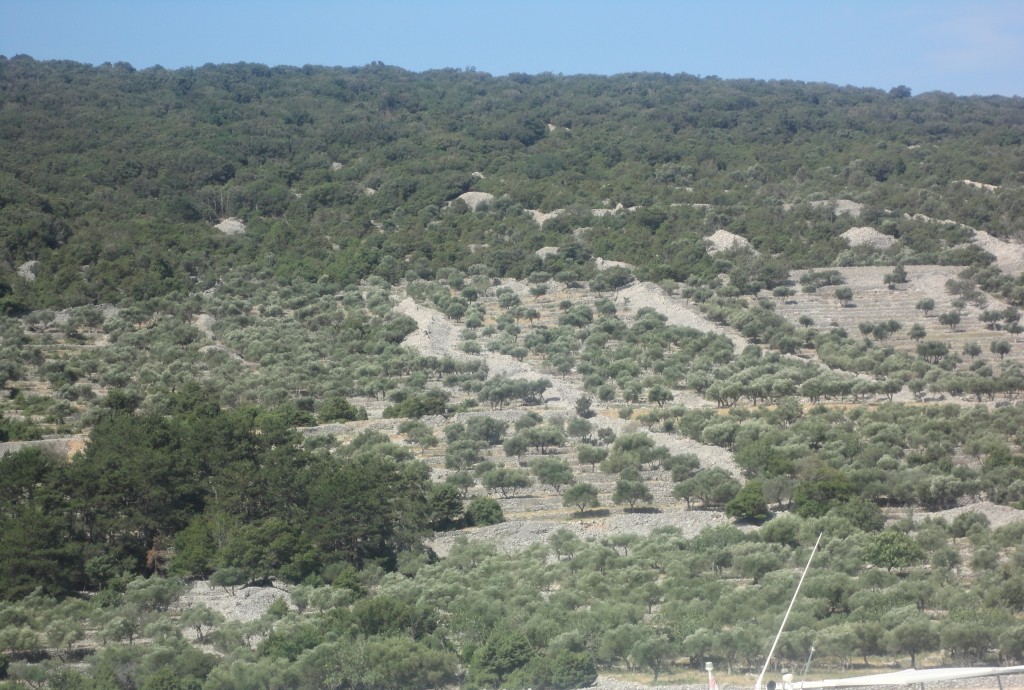 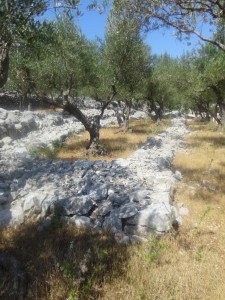 The space obtained between two menik forms a graja. Inside the graja there are various structures which serve to level the ground, to support the walls, to protect from wind, and so on. They are partly similar to the type of terraces we know from other places, but with differences in linearity and regularity. The stone structures of Cres take the most varied forms, depending on the location and type of land they are on. From the pile of stones, shaped by the ruptured earth, was created – after a careful and skillful selection by the mason – a well-defined structure. Each of the stones had their natural place depending on the type of material available, to finally form the diversity of artefacts that now exist in the landscape. 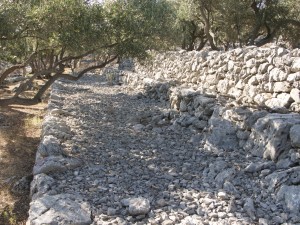 With limestone as raw material artisans or farmers could construct a diversity of dry walls, which according to the soil required, to the weather conditions or human needs are: double, single (ugnoli), support (scarpa and controscarpa), protection against erosion (barbacani), or for rest and break (pocivalić).

The double wall is in most cases on each side of the road. Its height and width were adjusted to the type of soil and the amount of material provided. Each path provided different shapes and styles. The walls that define the roads are usually of high-class design: fixed, stable and artfully finished with the most beautiful side turned to the street. 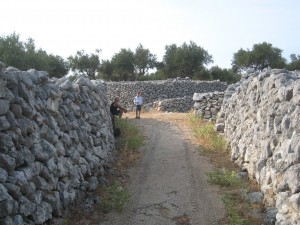 They were placed on the most exposed and frequented places, and usually at the mercy of critical examination of who daily passed them. In order to secure stability and be able to withstand the great weight that such a construction required, the wall had to rest on the bedrock. Only in rare cases drainage was necessary to ensure stability and safety. 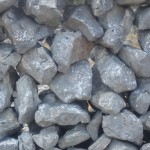 On the arable land the simple walls (ugnoli in dialect) has a width equal to a single stone but they are not very frequent, because they were deemed to have little significance for the cultivation. On the most exposed places, they were built to provide protection against the bora and northerly winds, with a special technique adapted to dampen the wind and still prevent the walls from collapsing. 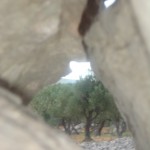 The retaining walls forming terraces, however, were of utmost importance to prevent the accumulation of stones, and landslips on steeper slopes. The walls placed next to “masieroni” (menik) are generally low so that the stones of the menik don’t slide down on the cultivated land. The so-called barbacani prevent erosion and slippage of cultivated land. Their height varies between 30 and 150 cm, the width between 40 and 150 cm. The same term is used by some farmers even for retaining walls (contra forte, scarpa, controscarpa) and terraces. When barbacani has smaller size it is called barbakanić (small barbican).

Large “Masiere” or “Menik” represents and at the same time symbolises the large amount of work required to set free the land from the stones and make it arable. When the material for the construction of these artefacts had been selected, a lot of stones were left, and then gathered in huge masses (menik) on either side of “graja”. The amount of work required to move such a quantity of stones in piles measuring up to 2-3 meters, meant enormous effort and toil. A small amount of stones gathered after a further cleaning of the terrain, in smaller mounds, are known as menicić.

In addition to devote oneself to ploughing  the soil, arrangement and planting of trees, the peasants participated in or contributed to the realization of the works described. The wall masters, largely   anonymous, were hired solely for the construction of “masiere” and other buildings, and as far as we know, few in number. Farmers who devoted themselves to the cultivation of olive trees and vines tried to take advantage of their skills for the constructions that were most difficult and required accuracy and specific knowledge. The higher and thicker walls, which usually line the paths, are in terms of safety, functionality and value fruit of the master’s workmanship. They had higher salaries and their working valued twice as much as a farmers work. 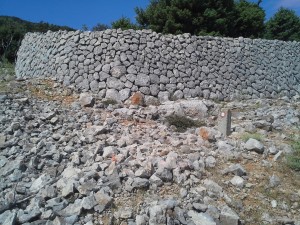 All “graja” are connected to road infrastructure, which consists of cobbled paths, alleys (klanez) and stairs. At intersections or strategic points were placed rest areas to temporarily put heavy loads, or as an opportunity to meet (pocivalić). Also on the road the craftsman’s skill in the use of limestone for each specific purpose can be noticed: to reduce and facilitate the flow of rain water, to protect the road surface, to reduce the slope and make it easier and more convenient for people and animals to travel.

Calculations and measurements of stone removal

In some studies at European level (Progetto Alpter) measurements have been made to show the amount of required materials and labor to build terraces on different places on the continent.

Alpi Marittime: the construction of a wall 2.5 m long and 1 m high requires 1.5 m³ stones facade, 1 m³ for filling and 0,25m³ soil. The time taken for this work is 4-5 hours, and the necessary material amounts to 6 tons. Preparation of a slope in terraces would, according to calculations, require 200-300 days of work per hectare.

According to the calculation by other researchers (Ph. Blanchemanche, Bâtisseurs the paysages, terrace elements, épierrement et petit hydraulique agricultural en Europe XVII-XIX siècles) in 1990 it was estimated that for an area of 10 square kilometers cultivated to 60% 120 000-180 000  working days were needed  , corresponding to a period between 8 and 30 years, if an active workforce of 20-50 individuals was available . This suggests that some slopes may have been terraced during a period of 50-100 years.

In Remo Terranova, in Cinque Terre, in Italy, 8.4 million cubic meters of stone materials for 2000 hectars of vineyard. were required for the construction of dry walls  of a total length of about 6720 km,

In the cited publication of Cavallini (under the title History) there is an appendix written by Dr. Antonio Petris and engineer Nicolò Bolmarcich. Their survey, conducted in 1900, revealed that 15 hectares (differing in surface area and nature of the terrain) out of a total of 1288 hectares of olive groves near the town  proved a growing density of about 249 plants per hectare, a total of 320,712 olive trees.  Of great importance and that most attracts our attention, is the ratio of crop and removal of the stones. As much as 1288 hectars out of 13/40 (418.40 hectars) occupied by stones in the form of: boundary walls, terraces barbacani, scarpe and controscarpe, stone cairns (menik), alleys, etc. 5/40 (161 hectars) of the total area is cultivated, but with low productivity, while the remaining 22/40 (708.40 hectares) is wooded by olive trees. The fact that 48% of the observed surface was covered with stones, removed from it, gives an indication of the large amount of work done. 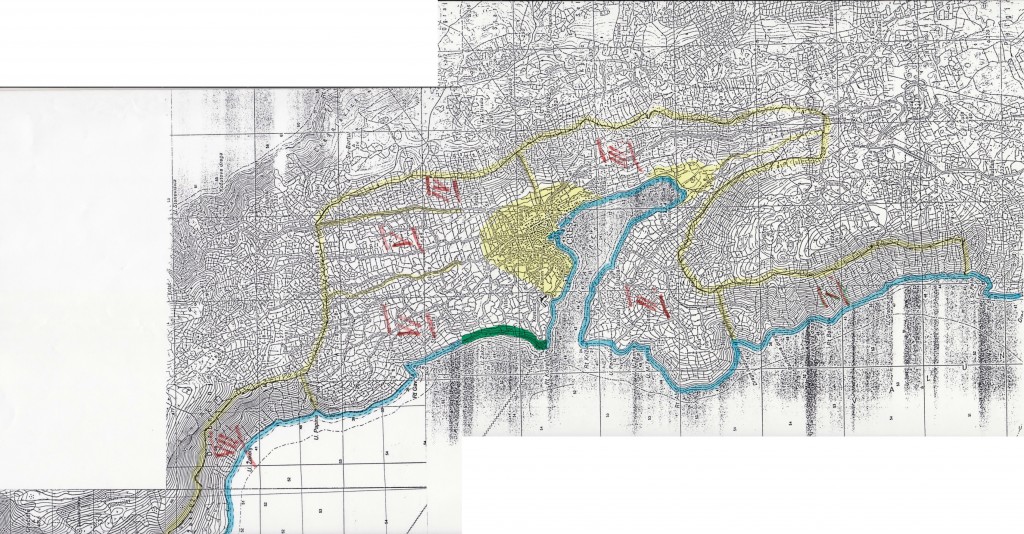